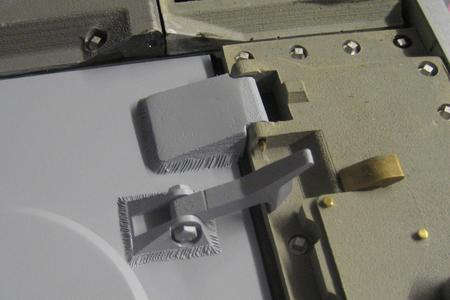 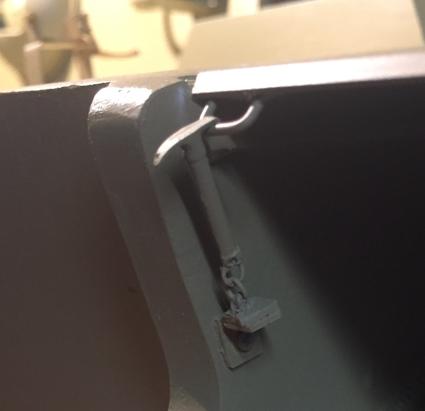 We removed the rear engine grills along with the engine compartment hatch.  We fabricated a new hatch using CNC milled 20 gauge aluminum which was slightly longer than the original.  We also reinforced the engine compartment using lightweight aluminum L stock riveted into place.  This provided much needed support and a much neater overall appearance.

The engine grills were replaced with an aftermarket set and a new latch/hinge assortment were also installed.  We used square headed bolts cast from white metal to help with the installation (see below left and center).

Finally, you will also notice the raised lip on the rear upper hull which was made from aluminum stock, countersunk and bolted into place.  The lip aligns nicely with the engine grills for a much more accurate look.  The grills and engine hatch are fully functional.  On the next page, we added engine screens as well.

One final detail that was added prior to painting were the two mudguard latches that were found on the front mud guards.  These were made from scratch using plastruct, brass chain and copper wire. 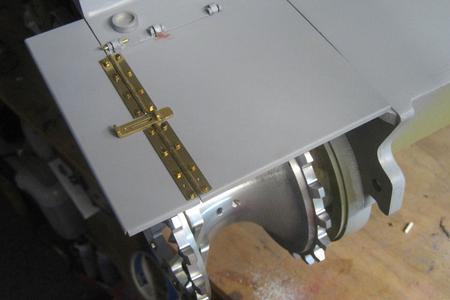 Here is the left front mudguard after installation of the brass piano hinge.  We have also installed a camo boss cast from white metal and have filled in any surface imperfections with glazing putty.  They are tough and fully functional. 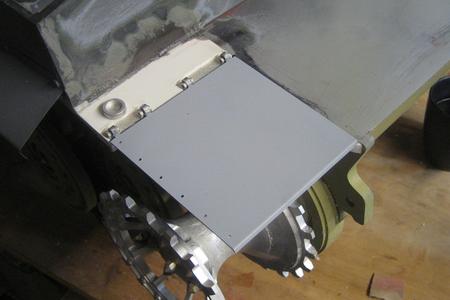 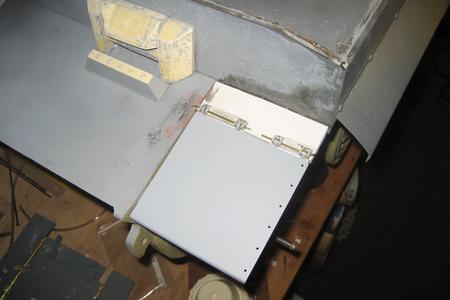 Our initial approach towards improving the front and rear mudguards was to rework the originals which are constructed of plastic.  We used a thicker piece of pvc board with some really good results but felt that if we were going to all of this trouble we might as well as use steel and white metal for even better results.

First and foremost, the panels for the front deck and mantlet had to be reglued and the seams filled.  We also had to extend and reinforce the lip of the upper deck on which the mudguard hinges would be attached.  We epoxied two pieces of fiberboard- one longer than the other to provide a solid "anchor" for the new mudguards.  Also, we installed a recessed edge that would allow the new mudguard to sit flush with the front deck as well.  See picture on right.

Next, we took measurements of our Tiger and paid a visit to our local sheet metal shop  to cut and bend a new set of mudguards.  We chose 18 gauge steel with a rolled front edge and four mounting tabs to act as hinges when mounted.  We used a piano hinge to secure the second half of the mudguard along with brass jeweler's screws. 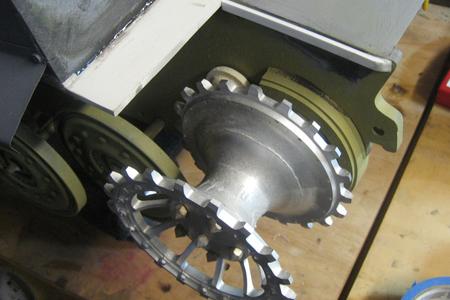 As previously mentioned, the plastic engine hatch was replaced with a custom aluminum one with a steel armored port and an upgraded engine compartment vent.  The hatch as well as the engine grills are now fully functional along with the white metal and aluminum latch and hinge set.  Handles were made from heavy gauge copper wire.  The tolerances in between the hatches and the engine grills are much closer and provide a more detailed appearance.

The plastic fire extinguisher that came with the kit was replaced with an upgraded unit made from white metal and photo-etched brass.  This fire extinguisher was found on both mid and late production Tigers.  We also added simulated weld detail to the latches and hinges too.

We redirected our attention on the front glacis of the upper hull where the old kugelblende and armored visor was previously removed.  The body panels were epoxied together and the seams were filled with modeling putty.  The kugelblende and the armored visor were replaced with upgraded aftermarket units which immediately added greater accuracy to the front of the tank.  We also noticed that the mounting tabs for the front mudguards had come loose and were not the proper width or length.  We opted to completely redesign both the front and rear mudguards which will be highlighted on the next page.

Pictured below Tom  installed the upgraded kugelblende and armored visor.  What a difference. 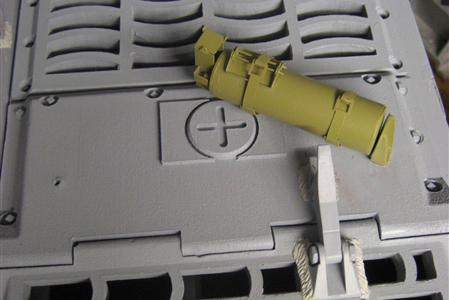 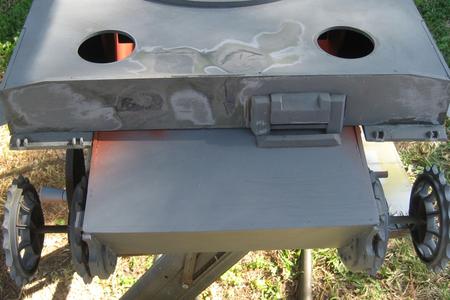 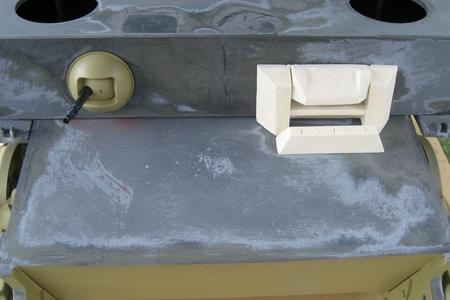 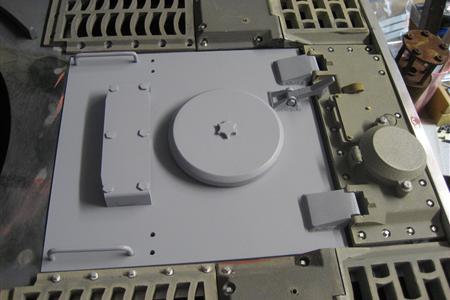 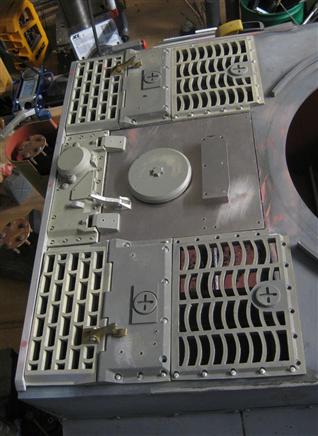 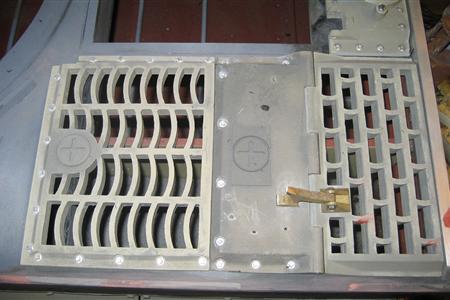 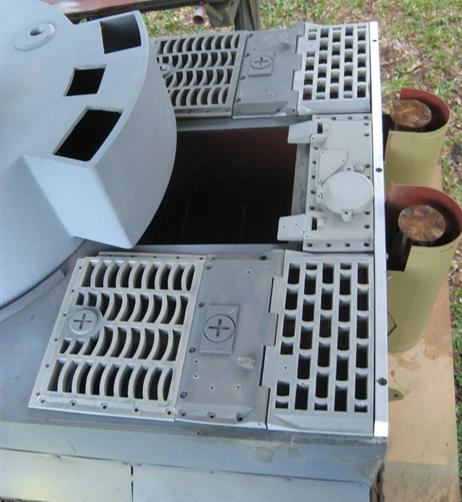 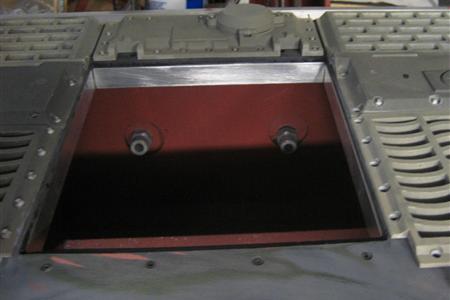 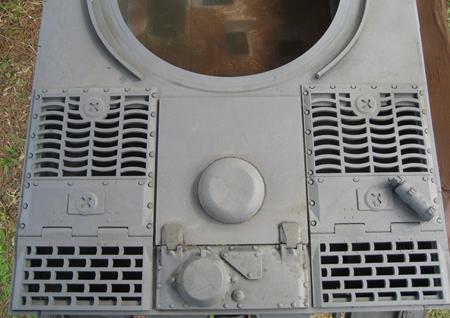 The upper hull required two types of upgrades- structural and surface details.  The engine grills and hatch were non functional and the rear hull did not have the correct lip or edge running laterally across the hull.  As previously noted, the upper hull sagged noticeably towards the center which would needed to be corrected as well.  We started by reinforcing the engine compartment.