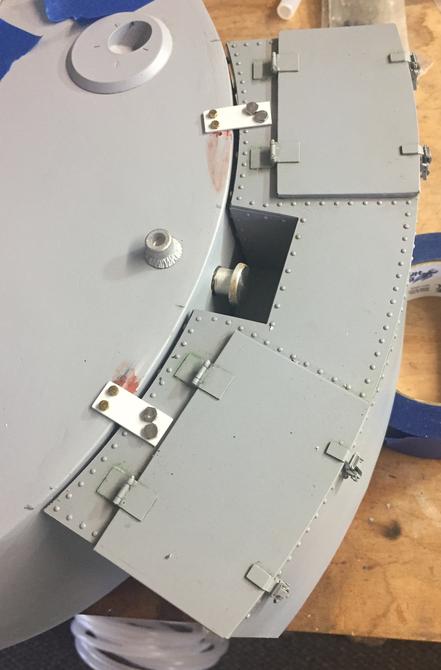 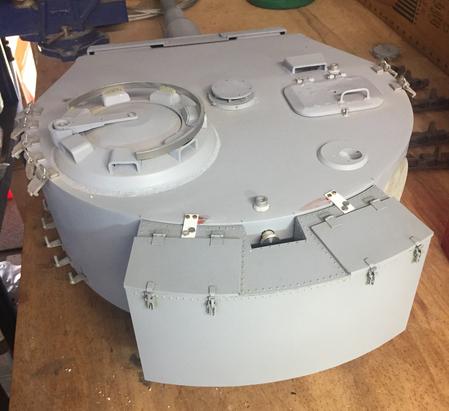 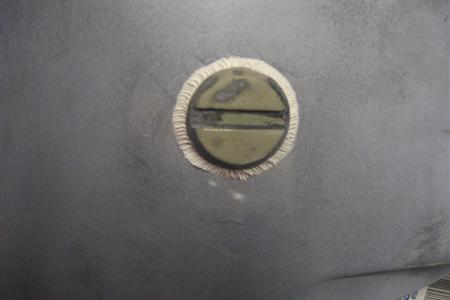 Finally, we added spare track link mounting brackets to the sides of the turret.  The track links received a rust treatment before installation.  There wasn't much we could do with the side pistol port except clean it up a bit and add weld detail. 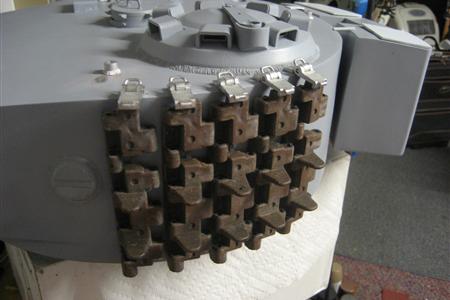 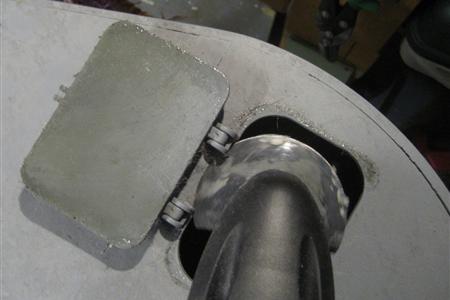 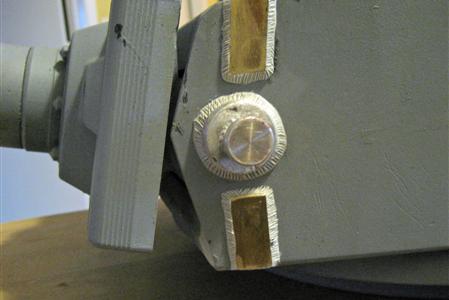 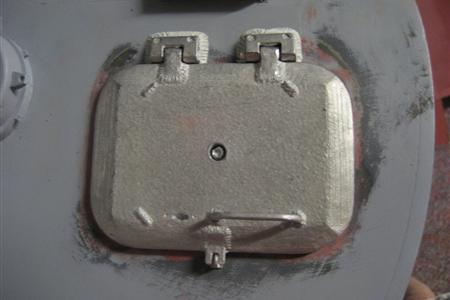 We replaced the original commander's cupola with an aftermarket unit which featured a working hatch and a lot more detail.  We added weld detail before applying another coat of primer.  We also replaced the loader's hatch with one that was cast from white metal.  The original opening had to be reduced in size by using thin strips of styrene epoxied around the edge and then sanded smooth after using body filler to fill any gaps or imperfections.  You can still see the outlines of the original opening.

We also added camo bosses and the anti personnel device to the turret top along with side mantlet details and the previously mentioned turret lift bosses pictured below. 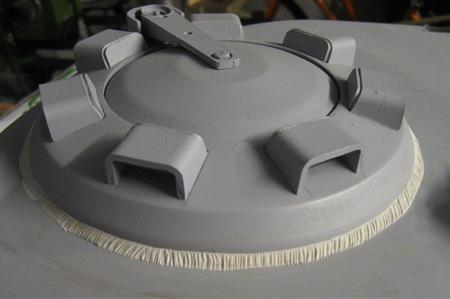 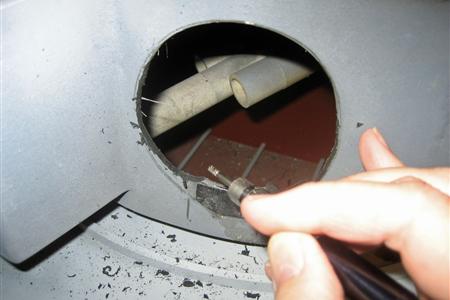 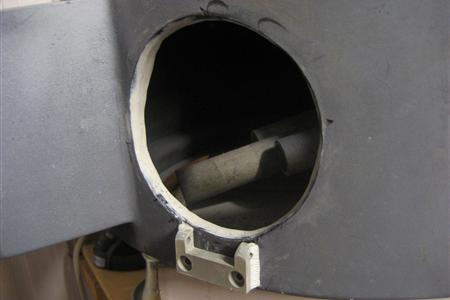 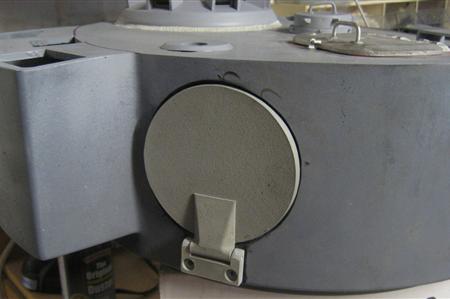 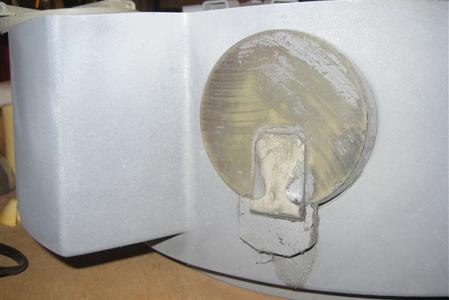 The existing escape hatch (pictured right) was lacking in hinge detail and seemed out of place.  We made the decision to scrap the stock hatch and enlarge the opening in order to install an aftermarket hatch which featured greater detail.  We were concerned that the new hatch might not be of the same proportion as that of the turret and would be mounted very close to the upgraded stowage box.

We started by opening up the hatch opening with our Dremel and then building up a interior edge about 3/8 of an inch thick.  We used a combination of strip plastic styrene and filler with lots of sanding in order to achieve a smooth and even fit.  This was not easy but the results were worth it. 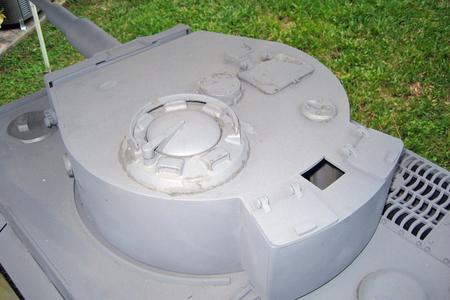 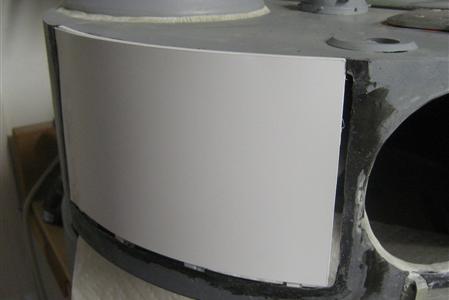 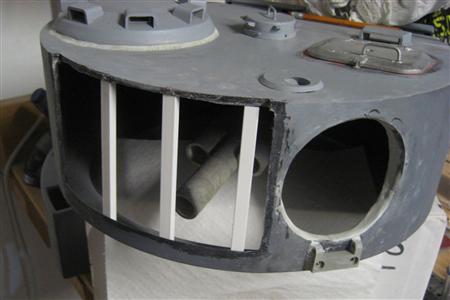 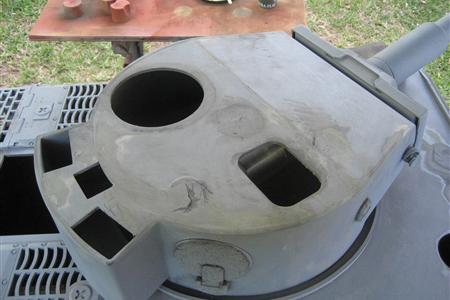 When we first examined the turret on our project Tiger we knew that we had our work cut out for us.  The turret stowage box was molded into the upper deck of the turret which was cost effective for the manufacturer but was not very appealing for the tank enthusiast.  This would have to go.  In addition, many of the surface features lacked detail or in the case of the escape hatch were the wrong size or dimension.  Finally, the hatches including the commander's cupola were in desperate need of upgrading and we were more than happy to oblige.

The first step was to strip the turret of most of its surface features and fill any imperfections with glazing putty.  Next, we took our Dremel cutting tool and carefully cut away the existing stowage box being careful not to remove too much material from the box itself.  We would be using the original box and wanted to avoid additional repair work.

After removing the stowage box we cleaned the edges and reinforced the interior of the turret with a two part sculpting putty which dries rock solid and is easy to sand and shape.  We then added strips of styrene to the edges of the opening upon which we will secure styrene sheet to restore the contour of the turret.

In this shot we have added the styrene sheet to the opening and will begin filling in the gaps and imperfections with fine body filler.  We also added a leading edge at the top of the turret to restore some of the material that was lost during removal of the stowage box.

The stowage box had been cracked at some point in its history and we took this opportunity to repair the crack and fill the floor of the box with fiber glass cloth and resin.  However, after taking the time to completely reconstruct the existing stowage box, Bob literally discovered a prefabricated stowage bin made from brass complete with locking hinges.  It had been sitting on a shelf and we have no idea where it came from. We used our existing brass mounting brackets on the bottom of the bin and made some mounting tabs up top out of Plastruct.

We ended up using two different size of fastener only because the stowage bin had been drilled and tapped for M3 screws.  A small price to pay for this impressive upgrade.

What a difference between the original turret (pictured below left) and the upgrade on the right.