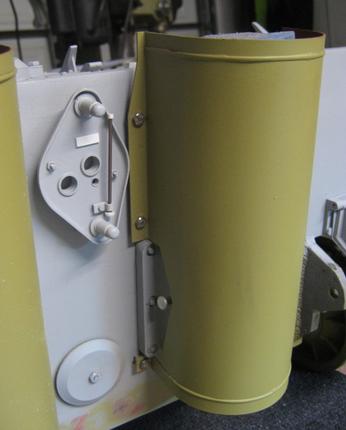 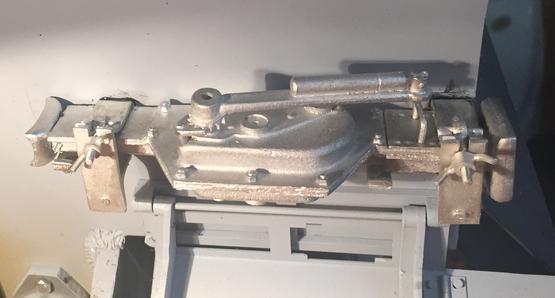 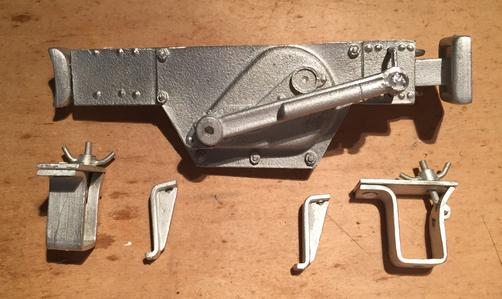 The Tiger's rear hull was a mess with a number of surface features that were either poorly detailed, poorly cast or improperly installed.  The exhaust shields for example were inaccurate and installed upside down.  The rear mudguards were non functional and not even close to scale.  Tom decided to tackle this aspect of the project by stripping the rear hull down to the bare metal, ah er plastic.

We used our Dremel Maxi Tool  to remove all of the plastic or resin features starting with the exhaust shields  We would not be reusing any of these components.

The entire rear hull panel was removed from the lower hull and then sanded flush using a finishing sander.  Surface imperfections were eventually filled and sanded once again.  We found a pair of aftermarket exhaust stacks and made additional changes to the outlets, measured the rear hull for mounting locations and then epoxied the new stacks in place.  (see below)

A pair of aftermarket exhaust shields were located and then upgraded using 1/8 inch brass strip.  These units were primed, painted and then secured to the rear hull plate.  Quite a difference.

Next, Tom added a scratch built ignition plate along with towing shackles, jerry can holder, rear idler adjustment covers, a red convoy light, pry bar and a rear towing hitch with a scratch built spindle.  Tom applied weld detail to the rear towing stanchions and will be adding jack mounts and jack above the right rear mud guard in the next set of pictures. 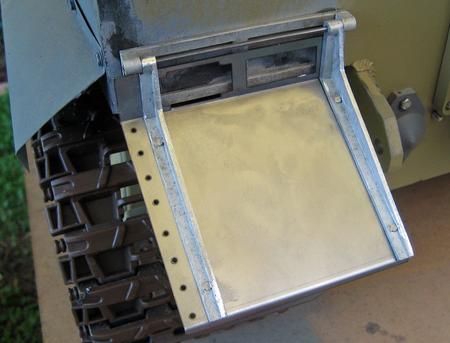 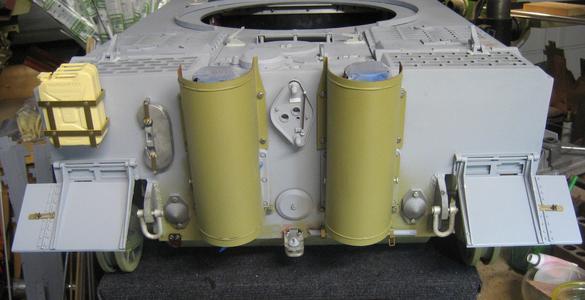 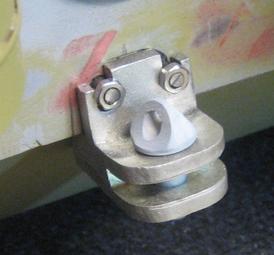 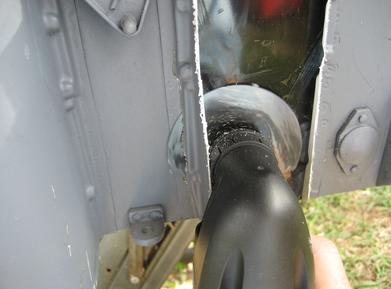 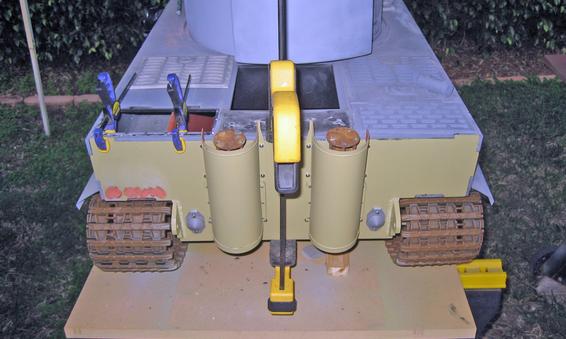 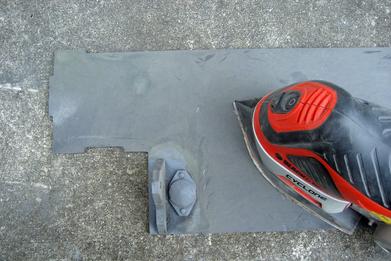 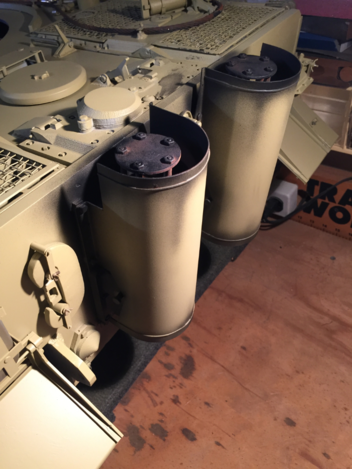 The 20 ton jack is cast from white metal and was purchased as an aftermarket item.  Assembly is fairly simple and requires only a file and some Super Glue.  The mounting brackets are white metal cast, functional, and the entire unit will be mounted above the right rear mud guard.  Fitment was a bit of an issue but we were finally able to mount the jack after some additional filing and regluing. 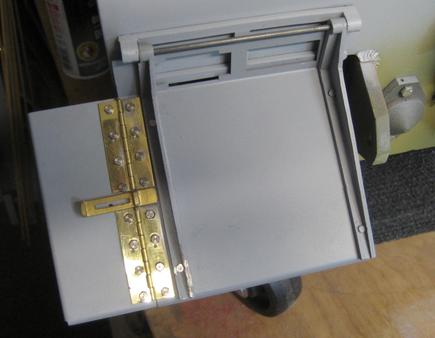 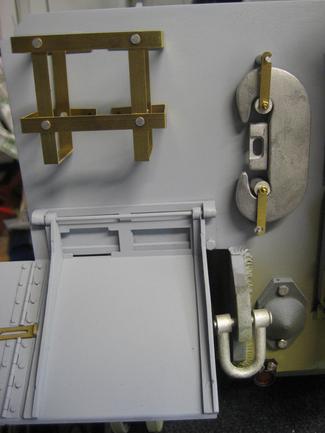 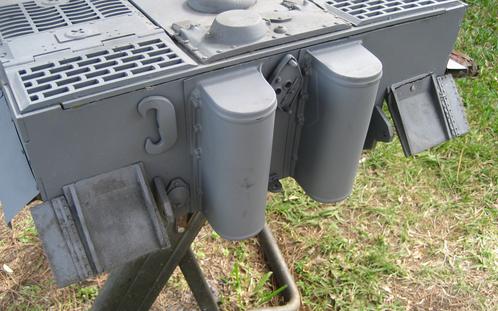 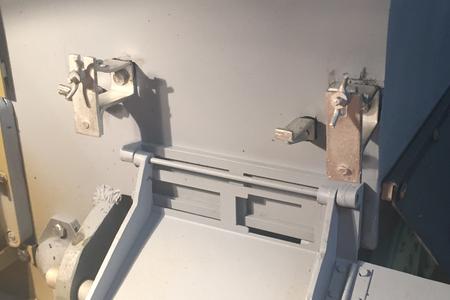 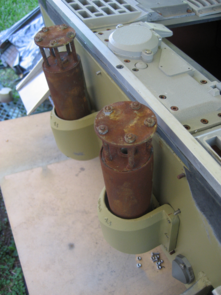 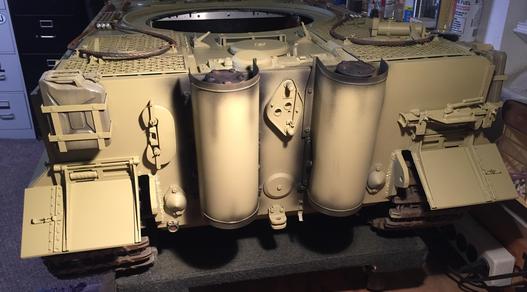 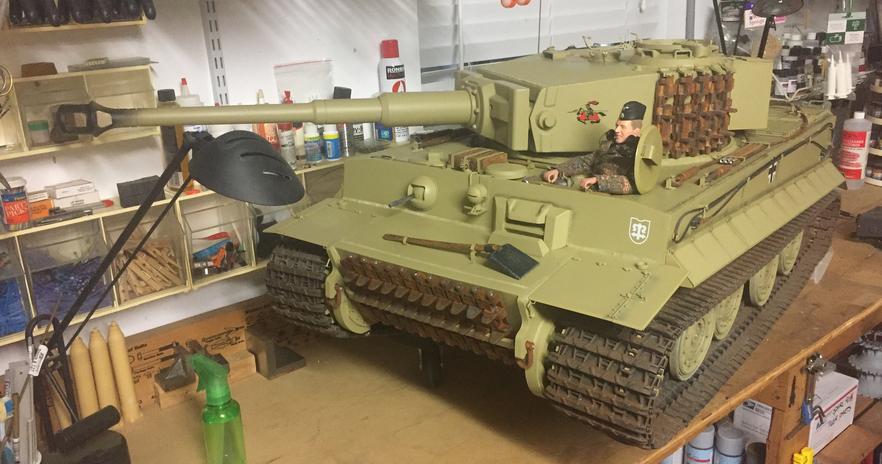 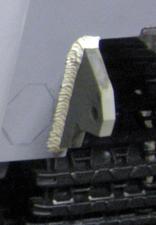 Weld detail was added to many of the seams using Aves Apoxie Sculpt. 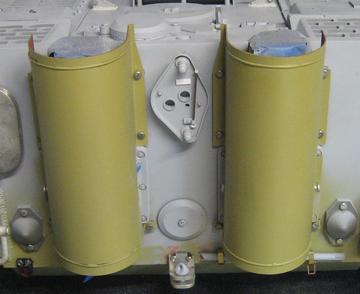 Once the rear hull plate was firmly bonded into place, Tom focused on the rear mud guards.  The stock units were not acceptable but aftermarket mudguards were far too costly for our budget.  We contacted our local sheet metal shop and had a pair of mudguards stamped and drilled from 20 gauge steel.  We kitbashed the mounting brackets and used a piano hinge to connect the two pieces together.  We used a bronze cast locking mechanism purchased from a chap in the UK and the final result is pictured below.  Quite an improvement at a reasonably low cost.

Final assembly of the rear is almost complete.  We have started adding exhaust residue to the exhaust shields and portions of the rear hull.  We have added divisional markings for our Tiger as well.  The Tiger is from the 24th panzer division of the Schwere Panzer-Abeitlung 505.  You will note the crest on the right front mantlet and the red knight on the turret.  Our tank will be #301 which fought in the battle of Kursk before being redeployed to Poland in 1944-45. 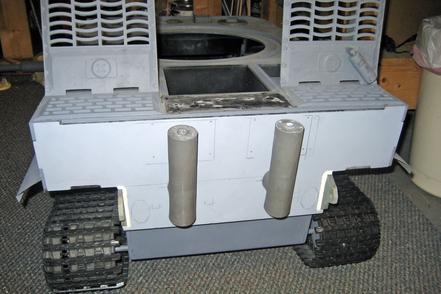 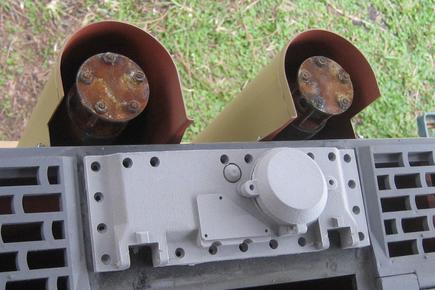