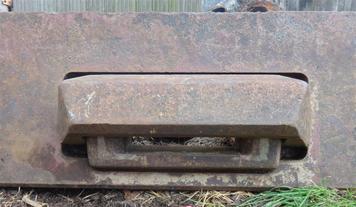 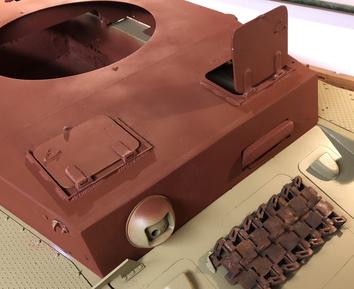 We trial fit the aftermarket driver and radio operator's hatches which are cast from white metal and are not included with the original kit.  We cut three pieces of styrene strip for each hatch drip rail and secured them to the upper hull surface using super glue.  For added realism, we added weld detail using modeling putty for each of the drip rails.  Pictured far right we have permanently installed the hatches and applied primer. 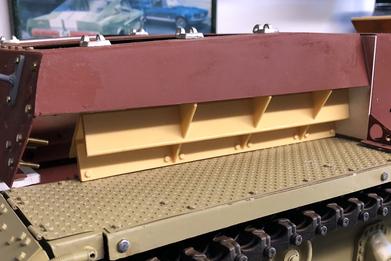 The upper hull actually aligns pretty well with the front glacis but the rear end needs more work.  We have started adding resin surface details and have started applying filler to the seams of the steel hull panels.  The armored visor will need additional work but installation of the Kugelblende is going very smoothly. 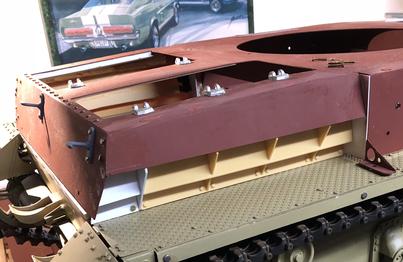 We have completed the construction of a styrene box which frames the opening of this particular engine hatch and allows us the ability to mount the two engine grills.  In the picture to the right, we have also added weld detail around the raised edge of the enclosure which not only enhances its appearance but adds strength as well.  The hinges were drilled and tapped with a 4-40 thread and then secured to the upper hull deck using stainless steel screws.  We cut off any exposed threads and sanded smooth.  We are really pleased with the overall look which is a vast improvement over the original. The engine hatch is both functional and accurate.

We will add exterior screw detail as well as two hand rails before moving on to the next assembly.  The hand rails are made from brass rod and secured to the hatch door using JB weld.

Another area of concern are the inlets to the engine compartment located on each side of the rear hull.  The kit supplies a pair of "grills" fashioned from sheet metal which we found to be difficult to use.  In addition, the opening was not properly reinforced and was missing a side wall which was hard not to notice.  We used sheet styrene cut to size to prep the opening for our new grills as seen in the picture below right and center. 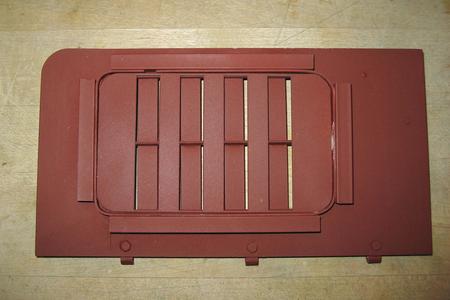 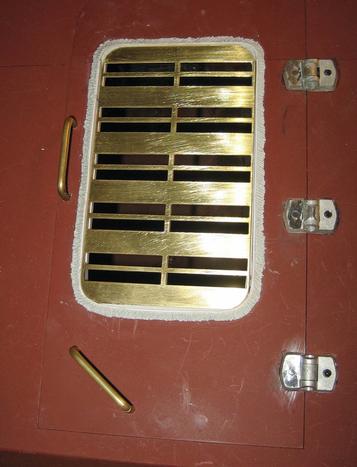 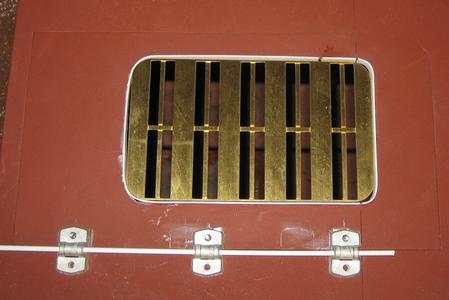 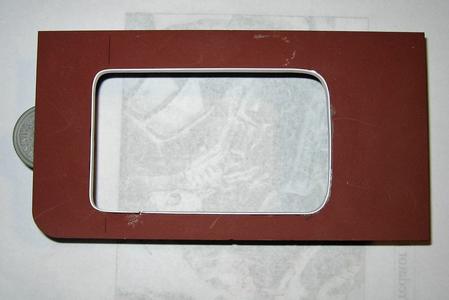 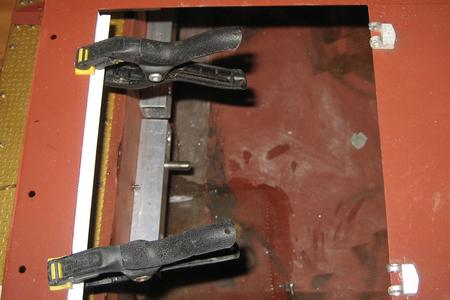 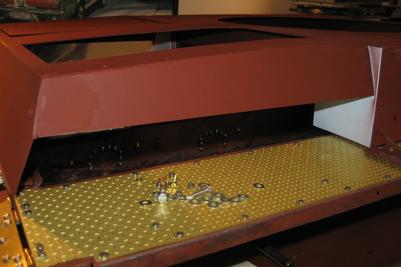 One of the most challenging aspects of this build focused around the engine compartment baffles.  We have had two sets of resin cast baffles or louvers acquired from another kit which did not appear to be long enough for this opening in the upper hull.  There is very little information on how these baffles were attached which made things even more puzzling.  After much deliberation, we came up with this solution and it looks great.  We added styrene extensions to the baffles to fill in the "gap" as seen below. 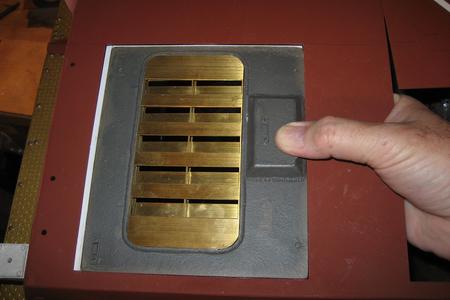 We have redirected our attention to the rear upper hull of our Panzer IV.  There are two hatches that have been cut from the steel sheet metal.  We have borrowed a resin insert from another kit along with a set of photo etched brass grills for the engine compartment.  The hatch will need to be secured to the hull using brass or white metal hinges and we will try to make them as close to scale as possible.

Our borrowed hatch was the correct length but had to be widened about a 1/8th of an inch to achieve a perfect fit.  We will epoxy mounting tabs inside the hull which will allow the hatch to fit flush with the upper deck.  The opening for the grills had to be enlarged with a Dremel which was easy to do.

We test fit the hatch once again and everything was flush.  We drill out the resin hatch and mounted two pair of white metal hinges to mount the hatch.  We also epoxied a recessed mounting tab or lip inside the hatch which will allow the hatch to open and close without falling inside the tank's interior.

The second hatch is a bit more difficult in that our smaller pair of photo etched grills will not fit inside the cutout opening. We used a cutting wheel to enlarge and trim away the opening for the grills. We then glued a 1/4 inch strip of styrene to create  side edge that will accommodate the brass grills.

We also noticed that the hatch bends at a slight angle on the end leading to the front of the tank.  We mounted our hinges to accommodate for this and cut the side wall with a cutting wheel to allow for the bend.  We framed in the enclosure beneath the deck with styrene to allow for the second engine grill which is all but hidden from view. 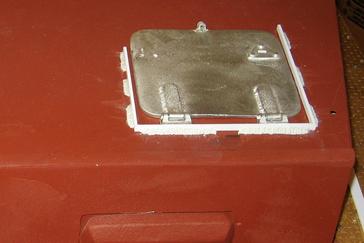 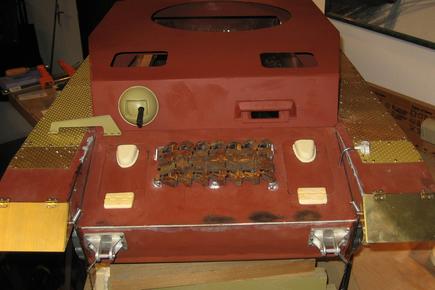 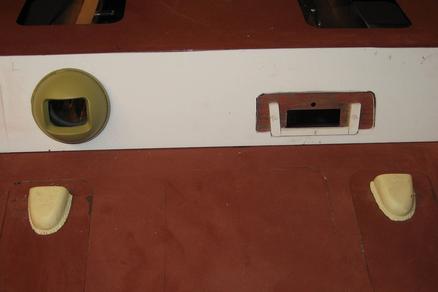 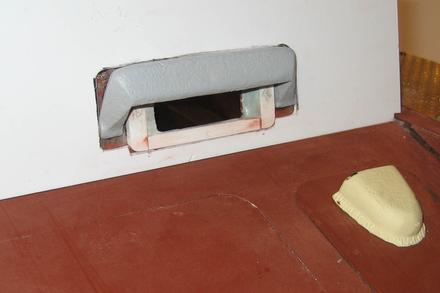 The resin armored visor that comes with the FOA kit was not adequate for our project so we opted to make our own.  We enlarged the opening in the front and then epoxied a layer of sheet styrene to the entire front surface of the mantlet.  After cutting a larger opening in the styrene we constructed the walls of the opening using strip styrene and used modeling putting for create a rounded cast effect.  The unpainted results were a vast improvement over the original.  We used an aftermarket Kugelblende and applied glazing putty to the front mantlet and roughed it up using a stiff paint brush for added texture.

We also added spare track link mounts to the upper glacis and applied a rust treatment to the spare links.  Another coat of red oxide primer and ready to move onto the hatches. 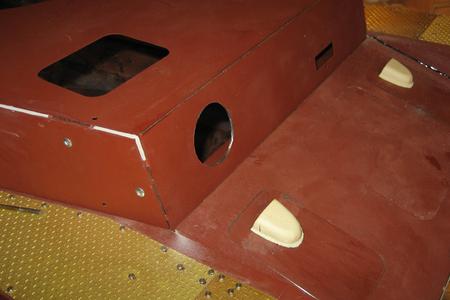 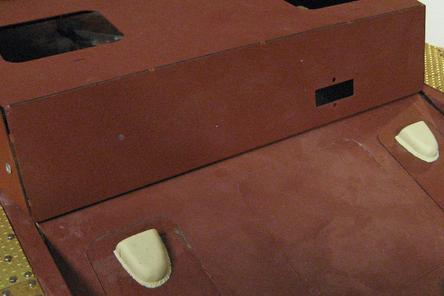 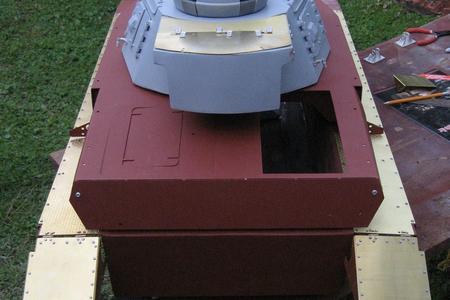 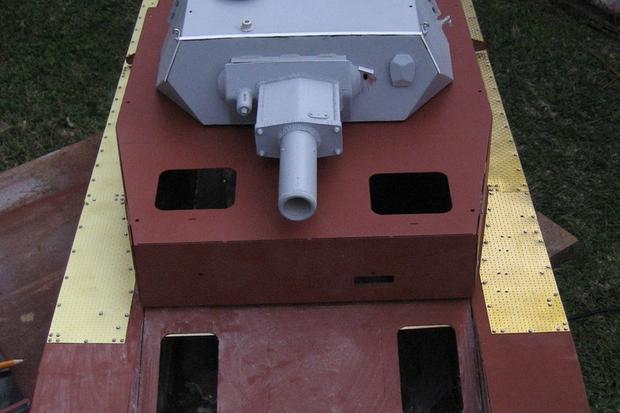 Assembly of the upper hull is fairly straightforward but you must always be careful with fitment and panel alignment.  We folded the upper hull according to the instructions and secured each side with 1/8 inch rivets.  In the first two pictures below left we are trial fitting the upper hull to make sure that that there are no major fitment issues at this point.

Two issues we noted right away was the size and location of the armored visor opening and the lack of any opening for the Kubelblende machine gun.  We used a hole cutting drill to solve this problem.