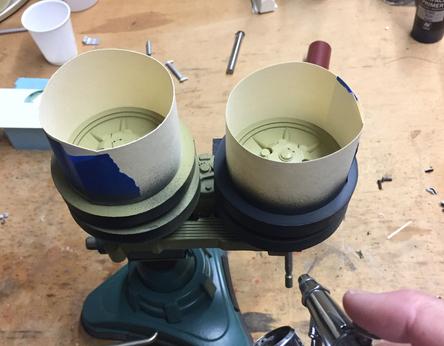 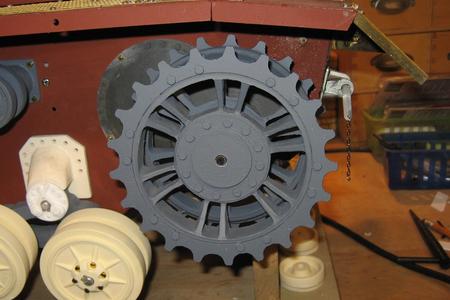 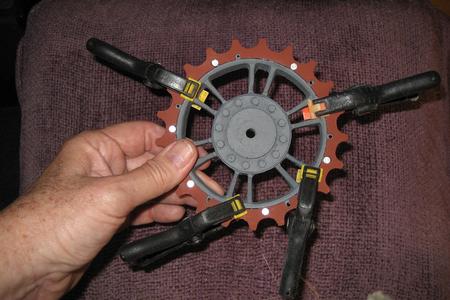 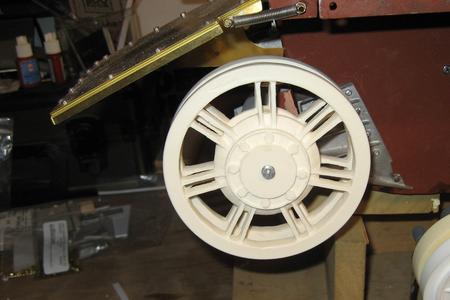 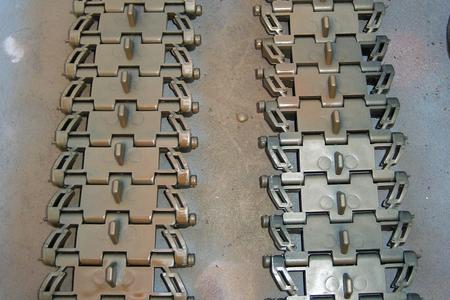 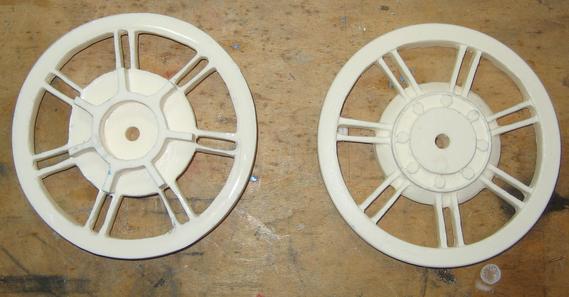 Now it was time to focus on the rear idler and sprocket wheels once again.  We cleaned them up and used body filler to even out the variations in thickness along the leading edge of the wheel.

For the idler wheels, we used two part epoxy and glued the two halves together along with the spacer in the middle.   We then drilled the idler mount in preparation for mounting which is pictured below right.

The sprocket wheel was cleaned and sanded of excess resin etc. and drilled for the mounting screws that secure the steel spoked ring to the main sprocket body.  We used 4-40 stainless screws along with JB Weld to secure the steel ring firmly in place.  We were tempted to enhance the sprocket wheel even further with castle nuts and the correct number of bolts along the outer edge but our budget and time constraints convinced us to move on. 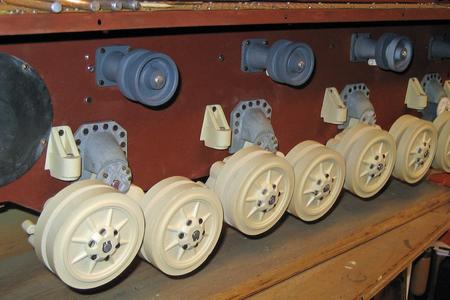 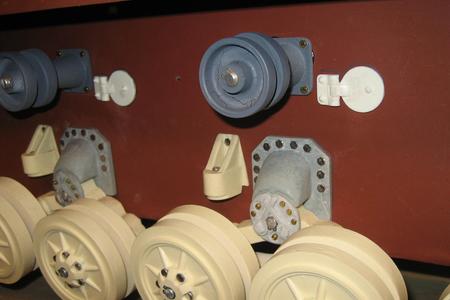 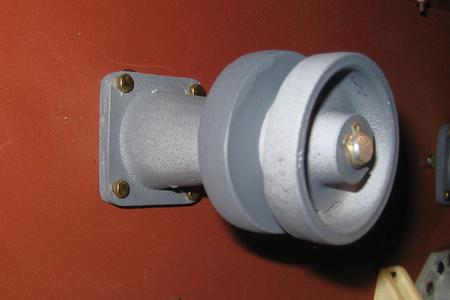 The track links for the Panzer IV were well designed and surprisingly strong.  Since this project was being built as a static vehicle we do not have to worry about the wear and tear on the plastic track link sets.  We painted each side with Tamiya rust brown enamel which gives a pretty good coloration to the tracks.  Spare track links were treated with a rust treatment and will be mounted on the front glacis.

During the assembly of the running gear we did not permanently glue the axles to their mounts knowing that some alignment or adjustment would be needed.  We wanted to be prepared for the likelihood that axles might be shortened or even lengthened in the case of the main sprocket wheel.  We test fit the tracks and immediately determined that the return wheels were correctly aligned.  We then moved to the rear idler and the main sprocket wheel.  Once we had finished with these, we lowered the hull in ordered to add weight to the road wheels to help align them to the tracks. When suspended, they are not lying flat to the tracks which can make alignment somewhat more problematic.

Pictured to the right, we have begun painting the tank including the roadwheels.  We used a paint mask in order to cover the wheel hub while airbrushing the "tires" with Vallejo Panzer Grey.  The end result is really good and saved us a lot of time and frustration by not painting by hand.

We redirected our attention to the return rollers, their axles and the spacers or bases that are needed for proper alignment.  The return rollers supplied with the kit are not exactly accurate but we opted to stick with the ones supplied in the kit.  Rubber tubing is recommended for spacers but we wanted to fabricate something better and more accurate.  We glued an inverted paper cub to a 1/8 inch piece of styrene and created a mold with the plug.  We drilled out four mounting holes at the base as well as a 1/4 inch hole for the axle and we cast a set of eight to complete the job.

We then cut 8 axles from 1/4 inch aluminum rod and turned them on a lathe to make room for the retaining clips on each end.  Each axle is 4.75 inches long but these may be trimmed down after final assembly and fitting of the track link sets.

We then used 22mm Delrin rod to make 1/4 inch spacers for all of the return road wheels.  This is a terrific material that is easier to cut than metal yet durable and easy to work with.  We drilled out the 1/4 inch hole for the axle on the lathe. 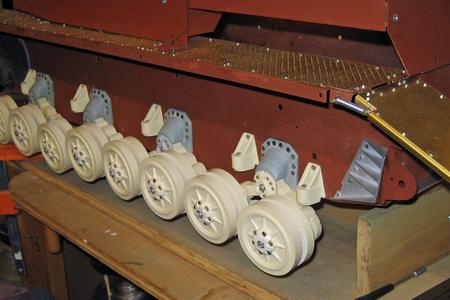 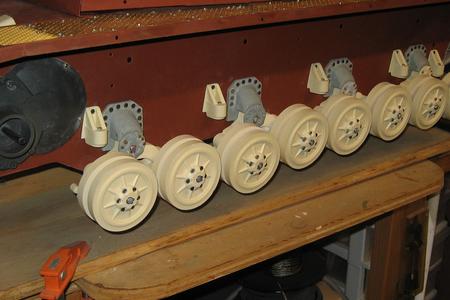 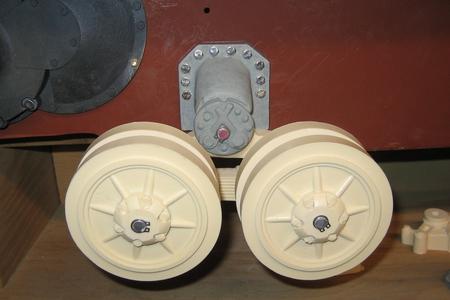 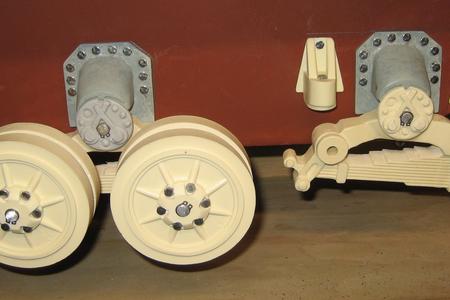 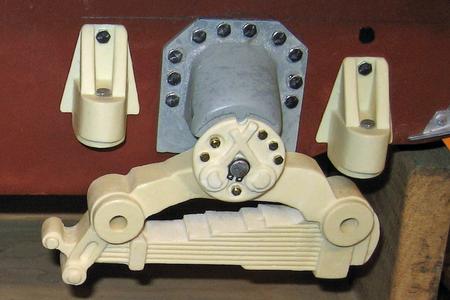 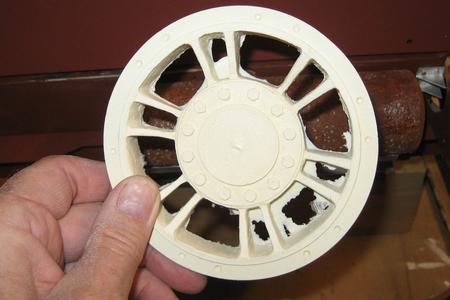 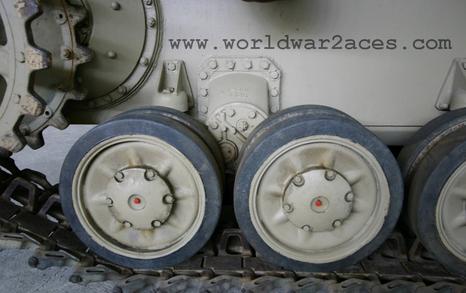 The Panzer IV  was produced in a fairly large number of variants although the configuration of the road wheels, drive sprockets and idler wheels did not change quite as much.  Late production Panzer IV's were produced with a more robust drive sprocket wheel and either a tubular or "spoked" rear idler wheel.  The wheels that were provided with the kit were found on a number of Panzer IV variants including the Nashorn, Wirbelwind and Sturmgeschutz tanks.  We opted to stick with the stock wheels which were reasonably accurate for our project but were suffering from questionable casting quality.

In this picture we have started the process of cleaning each of the drive sprockets, road wheel mounts and rear idler wheels of excess flash.  During the process we also noted that one of the idler wheels was a smaller diameter that than the others.  In addition, one or two of the drive sprockets were poorly cast and were irregularly shaped.  These will have to be replaced by contacting the manufacturer and ordering spares.

The road wheel mounts are very sturdy pieces but were cast with some of the openings filled with solid resin.  We took out our trusty Dremel with a router cutting bit and removed most of this excess material.  The casting was generally good on both the road wheel mounts as well as the individual wheels themselves but we believe that adding this step to the assembly greatly improved their appearance.

The end caps or covers that mount where the road wheel pivots on the anchor needed a lot of help.  The detail on each piece did not cast well and we removed the resin hex screws and replaced them with brass jeweler's screws.  We used a Dremel once again with a small round cutting bit to clean up as much as we could on each piece.

After we cleaned the road wheel mounts we turned our attention to the road wheels and the anchors or bases that secure the entire road wheel assembly to the side hull of the Panzer.  We removed the resin hex screws, drilled each one and then added stainless 4-40 hex screws in their place.  Once again, we wanted a slightly higher level of detail for those wheels that would be visible.  We repeated this process to the anchor mounts as well as the bump stops.  We secured these pieces to the side hull using M3 and 4-40 screws as opposed to gluing them in place.

We also replaced the steel axles with aluminum rod for several reasons.  We turned each axle on the lathe in order to secure them using spring clips as opposed to the more unsightly push nuts.  Aluminum does not oxidize as much as steel, is more lightweight and easy to work with.  Pictured below are the complete road wheels installed on the lower hull.