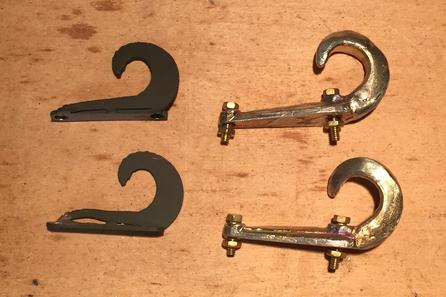 We used a set of aftermarket headlights and brush guards pictured to the far left.  We found a set of brass (?) tow hooks which replaced the steel units that came with the kit.  A side to side comparison shows quite an improvement over the originals.

Pictured left are the two hooks installed on the M3. 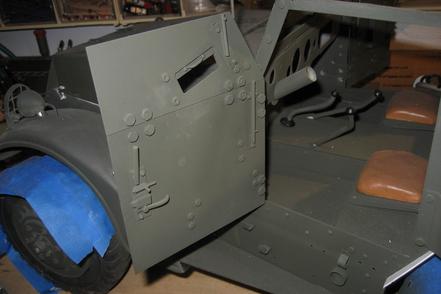 Pictured to the right, we have added the two bonnet covers which were carefully bent and sanded in order to achieve a snug fit.  This part of the assembly takes a lot of patience and its best not to tighten all of the hinge screws until you have aligned the bonnet covers.

We added brass hinges and were able to achieve a flush fit on the top of the bonnet but discovered that we had about a 1/16-1/8 inch gap along the lower edge.  We solved this problem by gluing a thin strip of styrene along the inside edge of the bonnet to help fill this gap.

There is a lot going on in this picture of the M3's rear door.  We enlarged the rear tail light openings and added some resin aftermarket units.  We originally installed brass hinges but realized that they were on the wrong side and there was no way to keep the rear door closed.  We scratch built a vertical locking mechanism using some spare white metal hinges from a tank turret and brass rod.  We added body filled all along the upper seam of the compartment to give it a more finished look.

Another feature that was modified was the tow hitch.  When originally installed the part that comes with the kit will not allow for the rear door to open.  This is a design issue and prompted us to add a tow hitch mount that allows for the hitch to rotate not unlike the real thing. 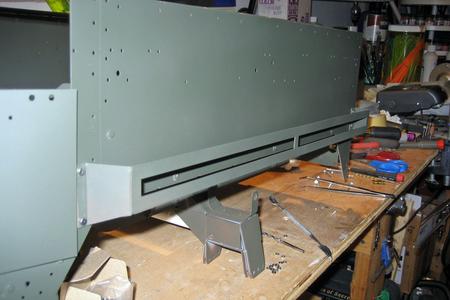 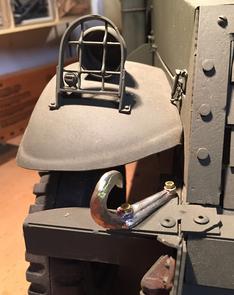 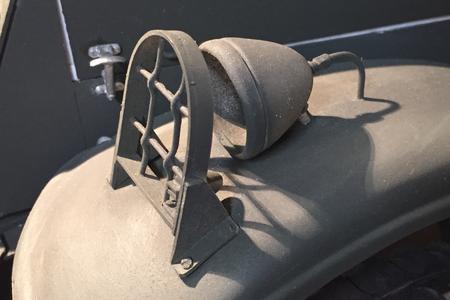 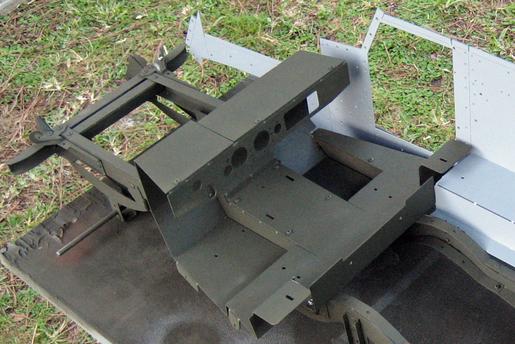 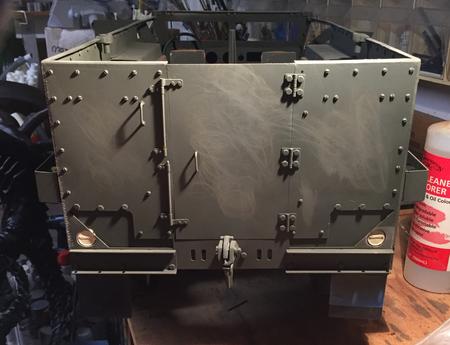 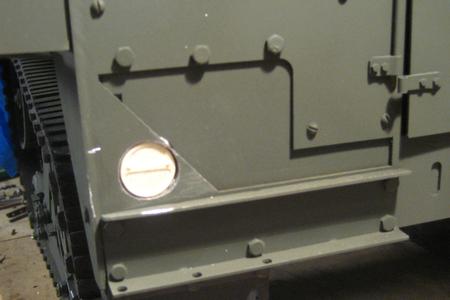 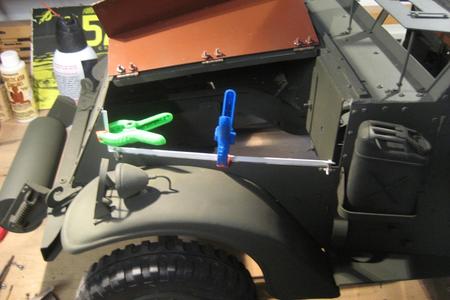 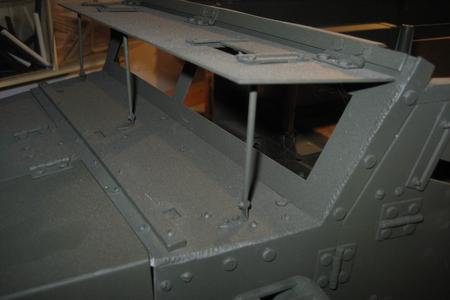 We decided to add more detail to the front windscreen and the windscreen armor that would normally swing down in the event of enemy gunfire etc.  We cut the armored panel away from the windscreen frame and secured it with brass hinges.

We then used a combination of brass tubing and brass strip to make support rods that could be folded down when the armored shield is in use.  These support rods keep the armor shield in place when not in use.  We secured these to the engine cowling, filled in any seams with weld detail and added a cross bar to the cowling for additional detail.  All in all, a considerable improvement in the overall look for the M3.

Pictured on the far right is in the installation of the mine racks. 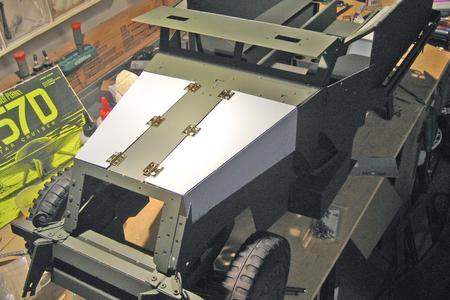 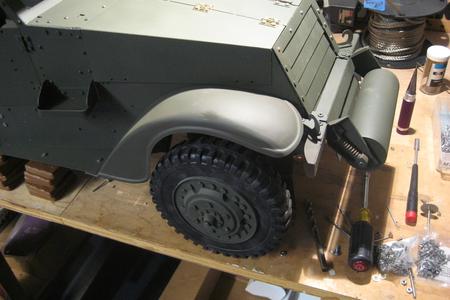 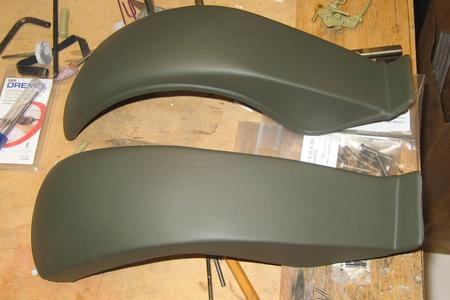 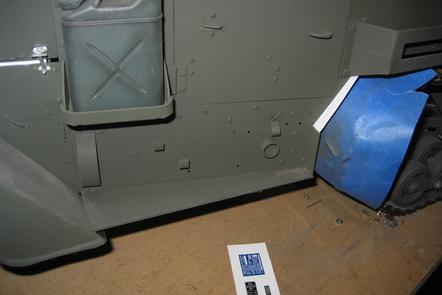 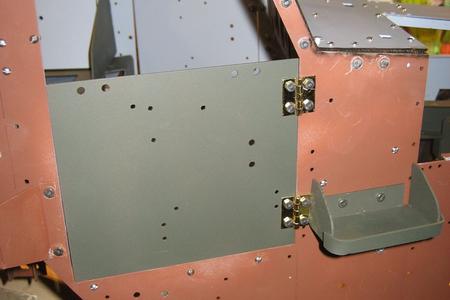 Next on our list was mounting the side doors, the windscreen frame and the armored shield that swings down.  We were relieved to see that the doors were properly aligned on our first try and we decided to use brass hinges and stainless screws instead of rivets for a more accurate appearance.

We also added door hardware to each of the two doors which does not come with the kit but adds considerable detail.  We had to fill in some of the holes in the door sheet metal in order to make it less cluttered and more closely resemble the actual door.   The upper half of the door was added next along with sliding armored windows which were also aftermarket parts.

We focused our attention on the front mudguards or fenders by sanding down any flash and applying several coats of olive drab.  We then fabricated some tool mounts for the driver's side door and extended the running board by using styrene strip.

The interior bench seats and floor assembly is folded together as one integral component and then reinforced on both ends with rivets.  We will be adding a diamond patterned flooring to the interior later in the build to cover up some of the seams as well as the rivets.

Another curious element to this component were the cutouts in the bench seats.  The instructions showed pictures of the cutouts which had been precut at the factory.  We assumed that these were used as additional storage for the troops but this was not correct.  We could find no mention of this feature.  Fortunately, we had not discarded the two steel strips and reattached them to the bench seats by gluing mounting strips to the inside edge of each opening.  No harm done except the additional labor. 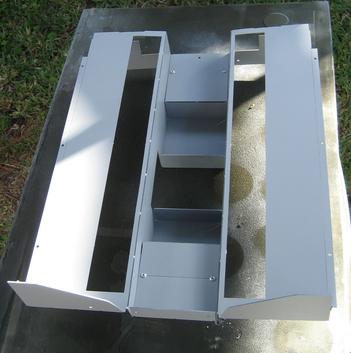 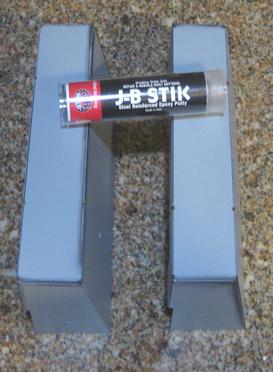 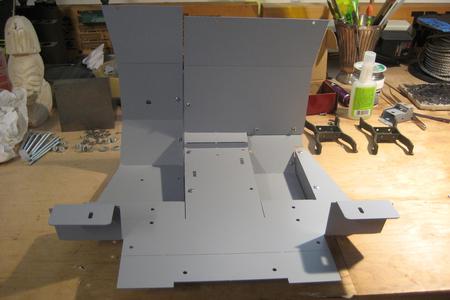 We started our assembly of the main body by folding the interior cockpit and securing it to the chassis.  We decided to apply several coats of olive drab to the chassis and the cockpit knowing that it would be difficult to reach certain spots as the build progresses.

The side panels which include the door frames and the side troop compartment were added next.  These are fairly wobbly when first mounted by eventually stiffen up pretty well.  We also added the seat backs which had to be folded, tack welded and then sealed with JB Weld and bondo for a more finished look.  These bolt to the side hull panels but we ran into a problem later in the build when it came time to add the finishing screws to the exterior.  Take this into consideration when you are completing this step. 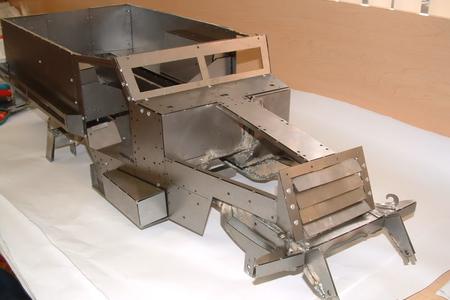 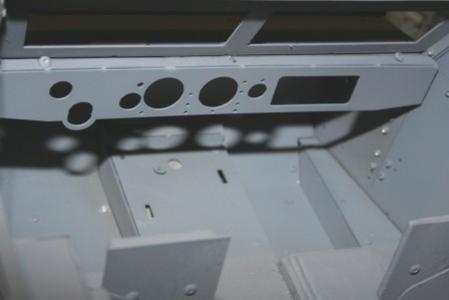 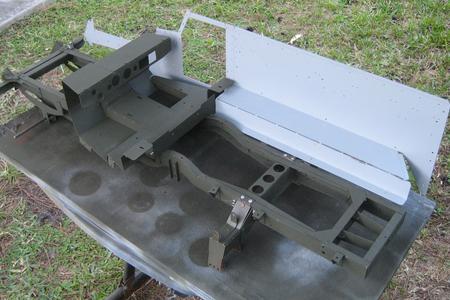 Assembly of the upper hull which includes the forward cabin, rear troop compartment and engine bay follow the same approach of folding and rivet.  We continue to encounter one or two obstacles along the way and look for opportunities to enhance or upgrade a given assembly as well.  Several modifications to the kit were made after the instruction booklet was printed so it is important to prefit everything before permanently securing or bonding together.  Randy is always very helpful whenever a question arises.